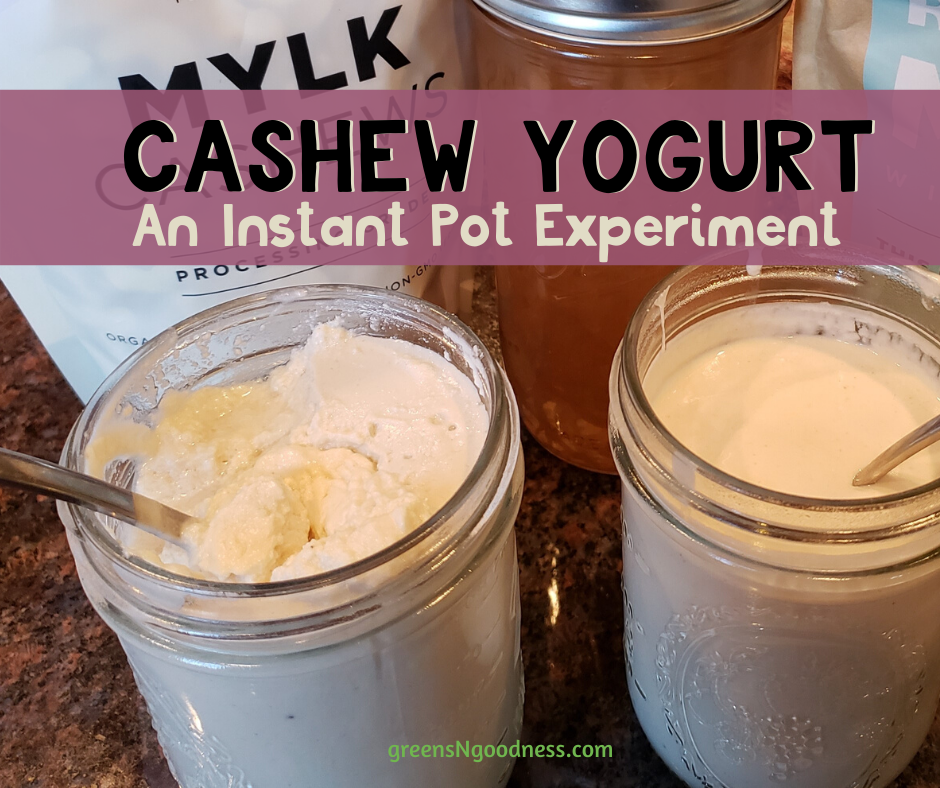 I love GT’s plain coconut yogurt, and I usually stock up at the co-op, about 30 minutes away. But, since grocery-getting routines have been a  bit different during pandemic life, I decided to play around with making my own healthy yogurt, using the Instant Pot.  Since I don’t have access to any fresh, raw coconuts, I decided to try cashew.  I probably could have ordered some fresh young coconuts, but the quantity needed to make comparable amounts of cashew yogurt would not be cost-effective.  Cashews are neutral-tasting and creamy, when blended, so I knew I would have a good base to work with.

For my first batch, I used 1.5 cups of soaked cashews & 1 Medjool date to 3 cups water w/ 1 probiotic capsule… left in the Instant Pot for 8 hours. It turned out better than I thought; creamy, tart & smooth, though not a really thick yogurt.  Obviously, I could reduce the amount of water in the recipe to create a really rich, creamy, greek-style yogurt, but I make cashew “cheeze” all the time, and was aiming for something less dense and more yogurt-like.

Since I didn’t want to reduce the water to cashew ratio too much, I brainstormed a healthy thickener I could add, and unearthed a bag of Irish Moss that had been forgotten in the pantry.  I repeated the previous yogurt recipe, but this time I replaced about 1/3 cup of water with the Irish moss (soaked overnight and rinsed very well).  I blended it all together, once again, stirring in a probiotic capsule and leaving it in the Instant Pot for 8 hours.

This second batch, with the Irish Moss, turned out thicker, which I had hoped for, and the taste was similar. It had a bit of a grainier texture than the first batch, though once I stirred it up and let it sit in the fridge awhile longer, that dissipated. And I could taste the ever-so-slight aftertaste of the Irish Moss, though I don’t mind it.

But, I will play around with it more and tweak it a bit, but, either way, these options meet my healthy yogurt needs, and I’m feeling very resourceful!

Based on my experiments, here’s a really simple recipe to get you started.  I’ll go with the recipe without Irish Moss, as it’s not something most people have on hand.  But, to make it a bit thicker, we’ll go with a little less water.

Prep Time:  There is an extra day of prep time, soaking cashews and “cooking” yogurt, but aside from the waiting, prep time for this recipe is 15 minutes or less.

Soak cashews for 4-8 hours (I just leave them overnight).  This step isn’t absolutely necessary, but it softens the cashews for blending and is said to remove substances that can inhibit nutritional absorption, as well as, improve digestibility.  So, if you want to strive to attain the maximum health benefits from your vegan yogurt, soak your cashews.  But, if you’re in a rush, let them soak for a half hour, or so, and give them a good rinse… it’s all good.

Strain off soak water and rinse cashews.  Do not use the soak water to blend cashews.  This could make your resulting vegan yogurt a tad funky.  If you want to conserve water, give the leftover soak water to your plants!

In your high-speed blender, add the cashews, dates or sweetener & water.  You can add a little vanilla bean or a pinch of  salt, if desired, but do not add fruit or other flavorings until after the vegan yogurt experiment, I mean process, is finished.

Blend until creamy.  Make sure there are no cashew chunks and that the consistency is smooth, like traditional yogurt.

Add probiotic powder (remove from capsule).   There are some vegan yogurt starters you can use, as well.  Just make sure you pay attention to the ratios on the instructions.  Pulse blender a few times to combine thoroughly.    Do not over-blend at this stage.

Pour blended pending vegan yogurt mixture into pint size glass jars (should be around 2)… though, any size jar (that fits in the Instant Pot) will work.  You can actually just pour the yogurt into the Instant Pot directly, but I find using jars to be easier, as it eliminates the step of having to scrape it out of the pot afterwards.

Set jars into Instant Pot and turn on “yogurt” setting for 8 hours.  You can experiment with the amount of hours, based on your desired “tangy-ness.”   ALTERNATIVELY, if you don’t have an Instant Pot, you could place the jars in a dehydrator set to around 110 degrees, or other warm environment, and the probiotics will do their things just fine.

Remove and refrigerate for about 4 hours before consuming.  If separation occurs, you can, either, strain off the liquid to make yogurt creamier, or just stir to combine.  Enjoy the fruits of your vegan yogurt labor!

Do you have a favorite healthy non-dairy yogurt recipe?  If you try this one, be sure to share your results and feedback! 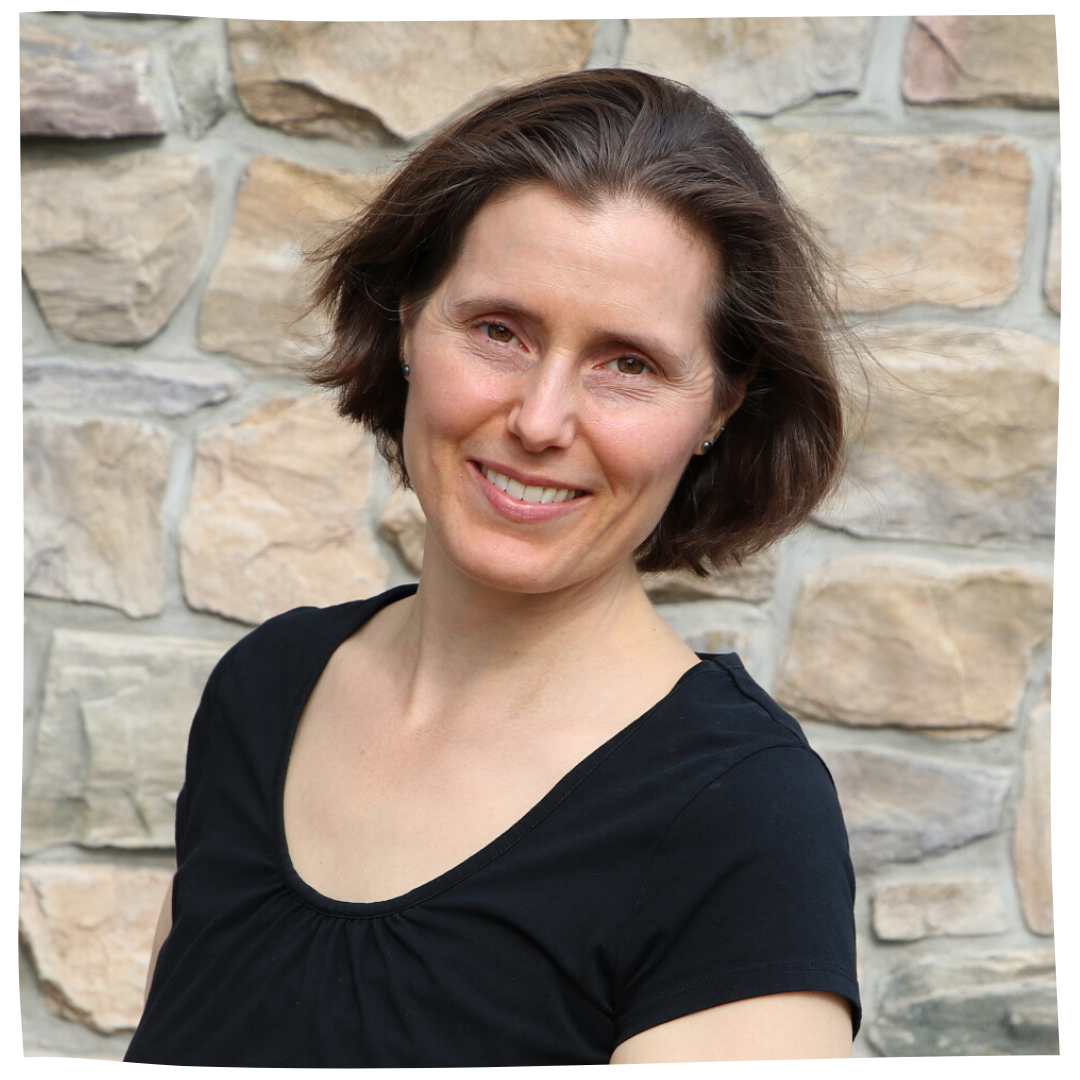 My name is Tara. I enjoy supporting those seeking to align their lifestyles with their values and feel more "nourished" in all areas of life.

Your wellness journey is not about perfection. It’s about being your own health advocate and committed to making your health and well-being a priority throughout all the stages of your life. It’s not just about losing weight, looking good for a special event, or impressing others with your accomplishments.

Three things I know for sure are:
1. that if you don’t show up fully for yourself, you cheat others out of experiencing you fully

2. if you don’t care about what you eat, what eat won’t care for you

3. if you settle for less than you deserve, you will always know you cheated yourself.